For my shooting I used roots and various objects that were thrown on the coast of Calabria by the sea. It is an allegory for people who were thrown out onto the edge of life .
This attempt to tell through the “Live” illustrations about feelings of people who survived a tragedy of migration is based on a personally experienced trauma of a refugee.
“Herbarium” is my archive of experienced emotions and preserved memories transmitted through photographic images, which I project on migrants who find themselves on the coast of Calabria.
The roots encompass multiple levels of meaning, as well as contradictions, ideas of homeland, conflict, and hope. It is a strong symbol for creating identity.
To a person migration stands for boundary between past and future. The shooting took place on a shore. Coast is a boundary between land and sea, a border zone. Refugees are also in a borderline state of uncertainty: psychologically and physically they are neither there nor here.
Each photo in the series marks a new artistic image, emotionally associated with a previous one. 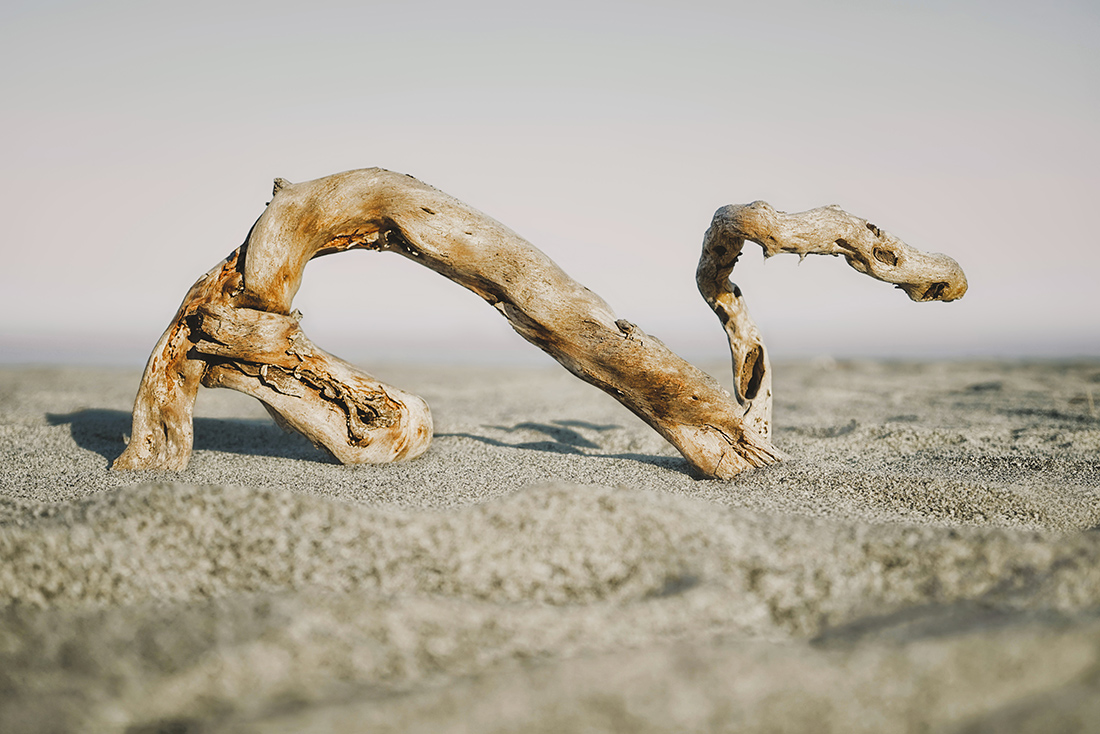 Snake
When a person is in danger of war or a natural disaster, they have nothing left but to leave home and look for a better life in a foreign country. 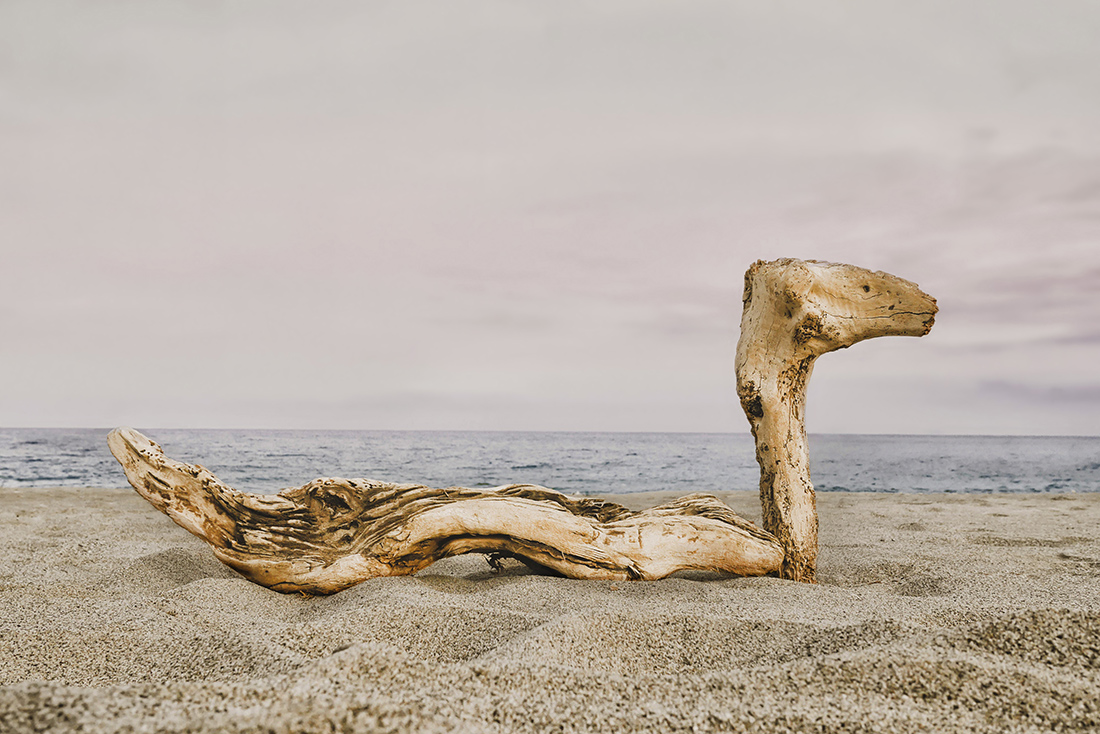 Sea monster
Migrants are transported to Calibria by sea in an illegal way. Criminal groups and international terrorist organizations enrich themselves in this business. It is possible to cross the distance to Europe within 24 hours. However, if to take into account the ships they use, such a journey takes approximately a week. That is if you are lucky and the boat does not crash. 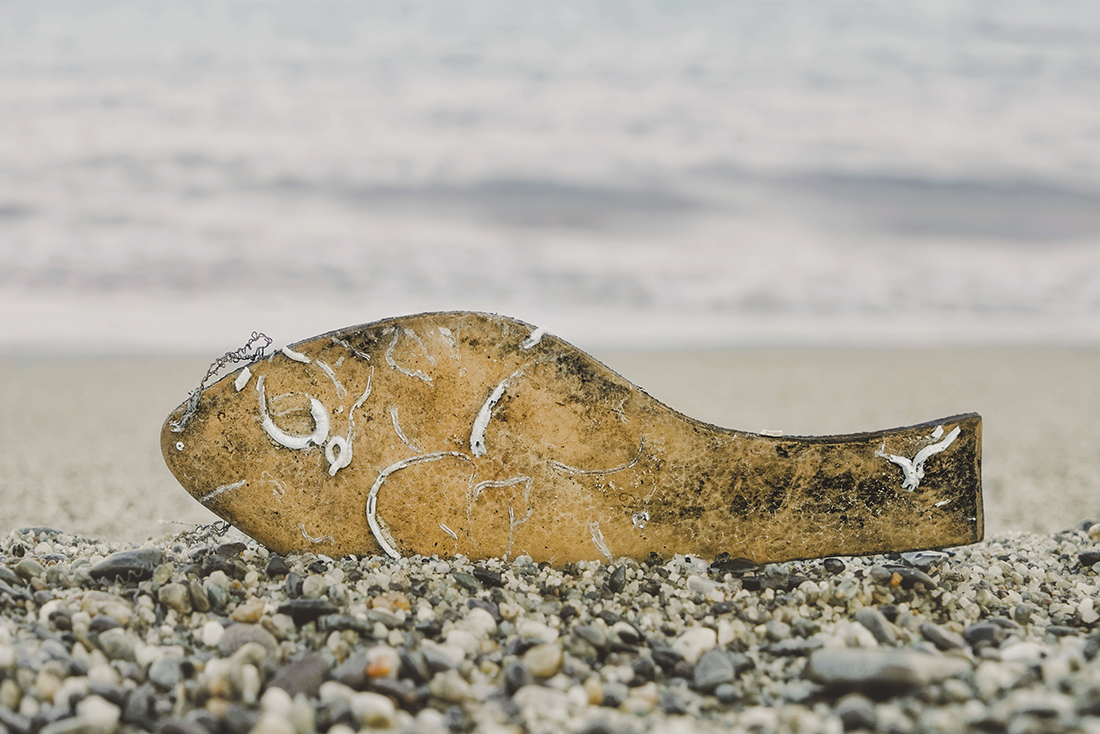 Sole
A sea route to Europe through the Mediterranean Sea is the most deadly in the whole world. According to the UN Commissioner, in the first seven months of 2018, over 1.5 thousand refugees drowned in the Mediterranean Sea while trying to get to Europe. Dating from 2000 to 2015 the death toll was about 22,000. 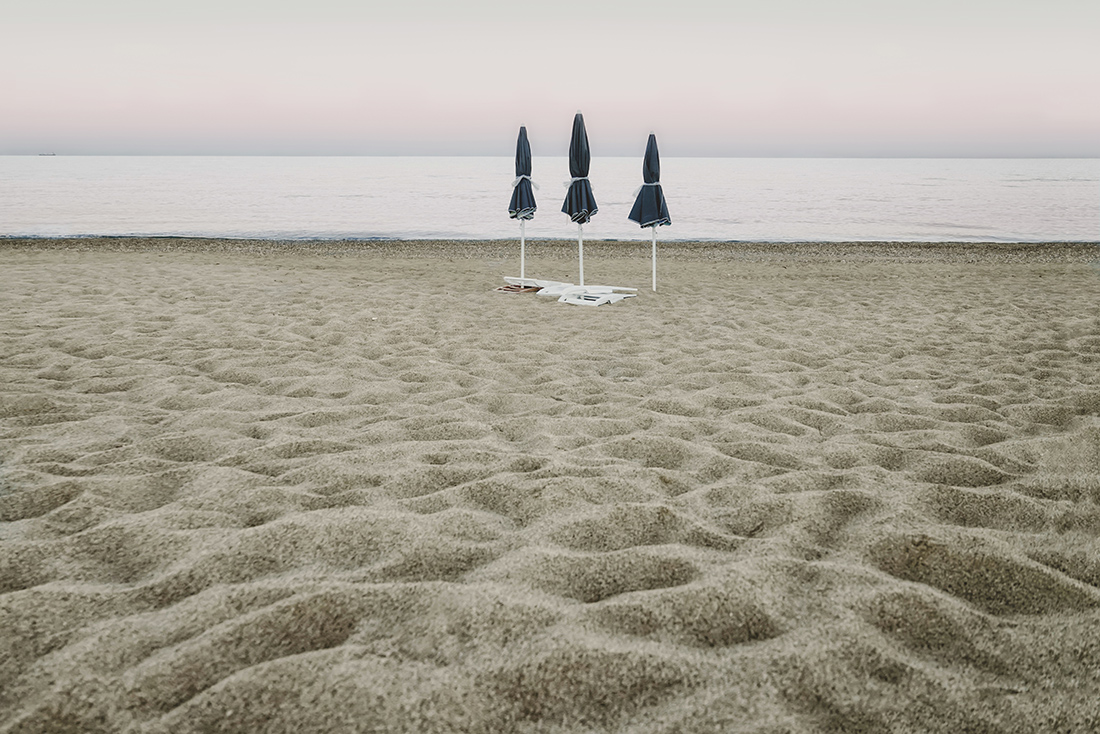 Coast
The largest number of people arrived in Italy — almost 70%. The Promised Land is not something that awaits refugees who manage to reach the shores of Europe. Some face arrest and deportation. 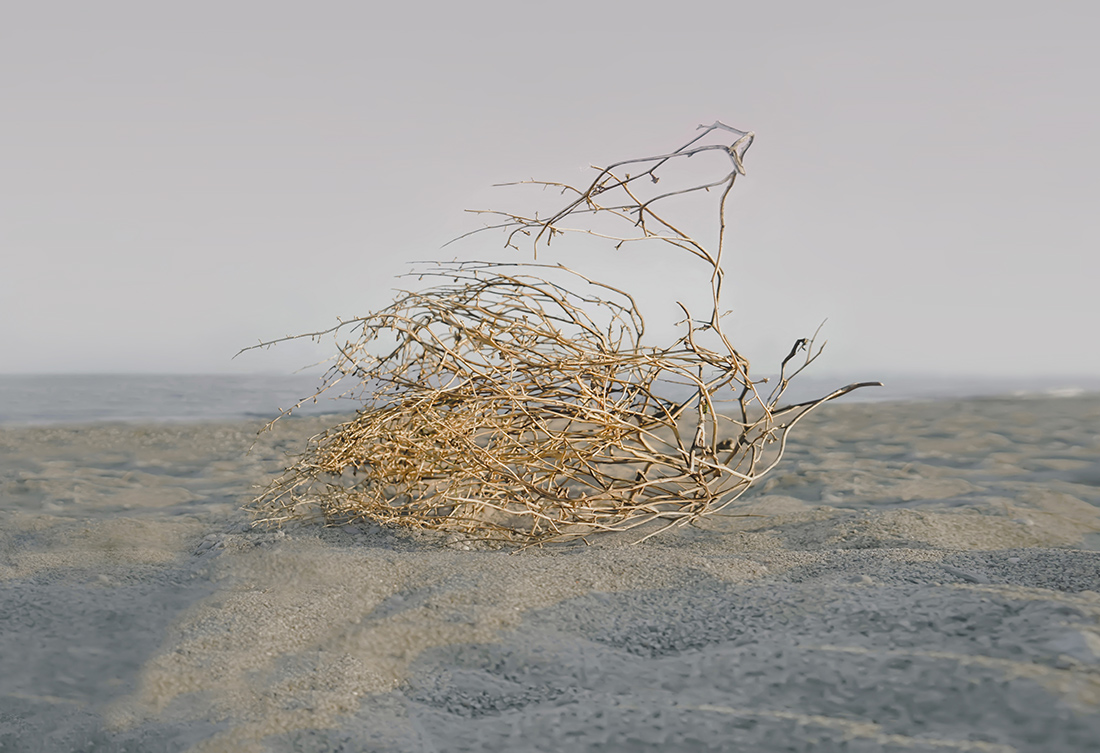 Tumbleweed
Tumbleweed is a plant that detaches from its root and is carried by the wind for great distances scattering its seeds.
One third of refugees and migrants who arrived in Europe are children. Some of them are heading with their families and some go alone. They risk their lives in search of a better fate. At least 10 thousand refugee children who came to Europe without parents and relatives disappeared after crossing the EU border. 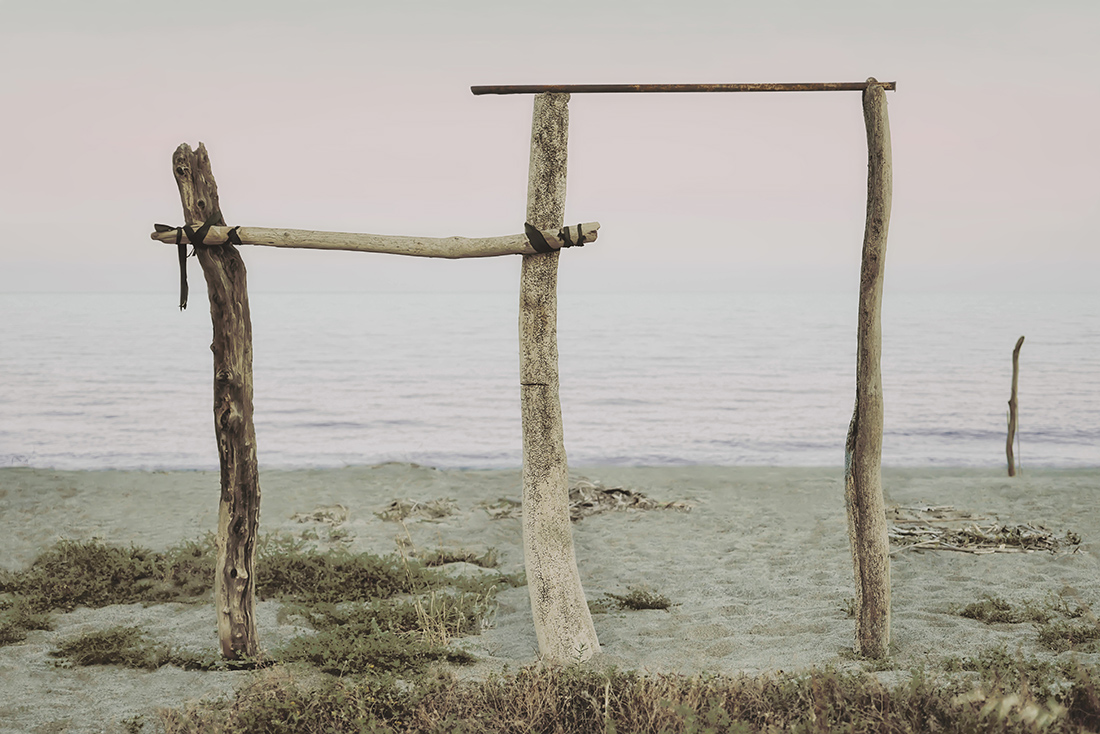 Gate
For refugees Calabria is a gateway to Europe. In Italy refugees try not to linger, they strive to get to the countries of Northern Europe that provide the best social guarantees. 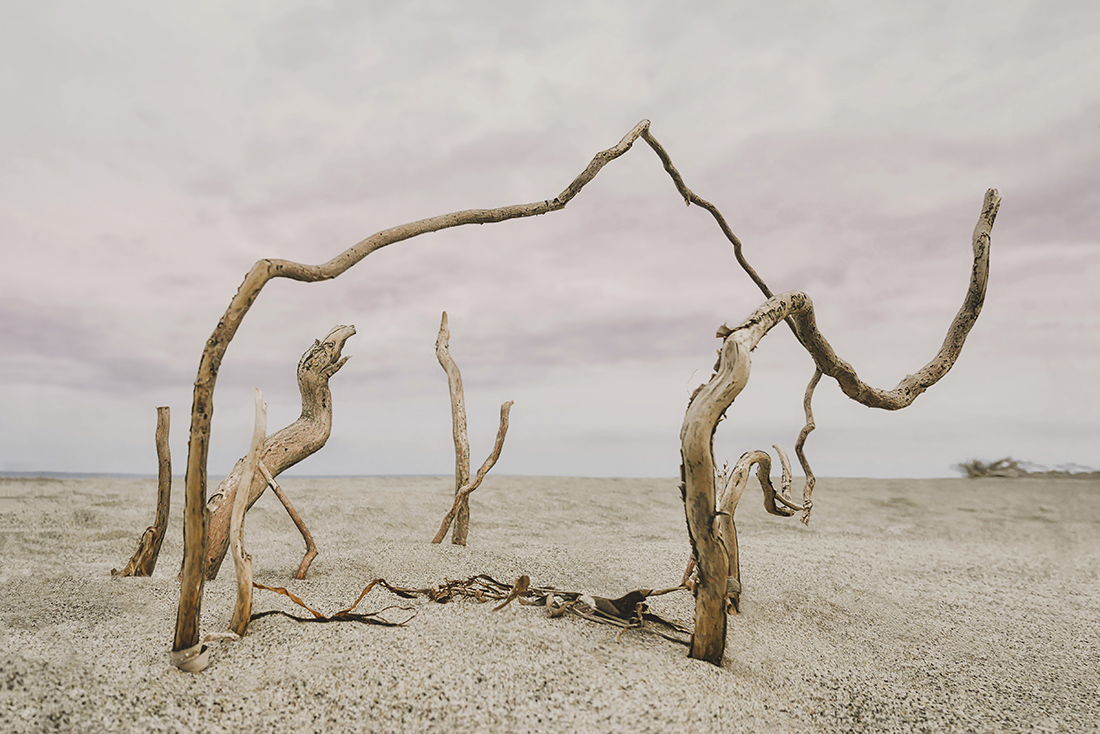 Petroglyph
Petroglyph is a primitive cave drawing. People fleeing from war and having lost everything experience basic physiological needs for food, water and protection from bad weather conditions. Refugees have a primal fear of death and powerlessness. The basis for these fears are the instincts of self-preservation, which made it possible for our ancestors to survive in the wild. 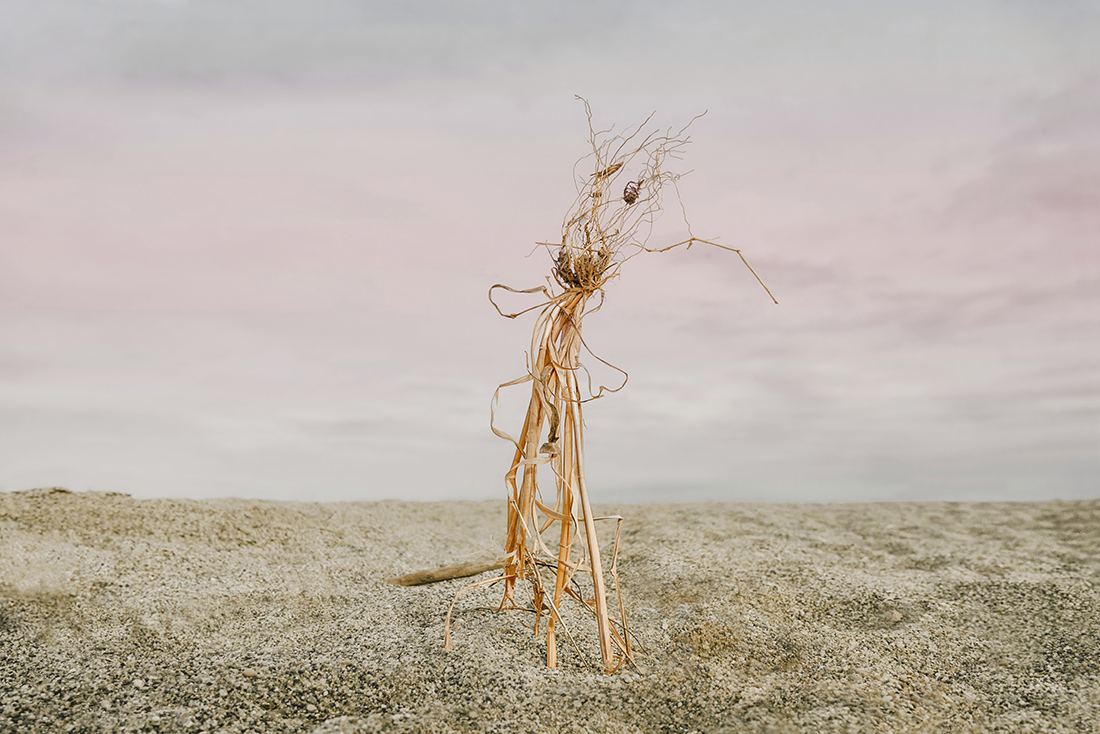 Grass
Forced migration means breaking with the past, homeland, connections. People are literally pulled out of their land. A man without a place is like a plant without roots. 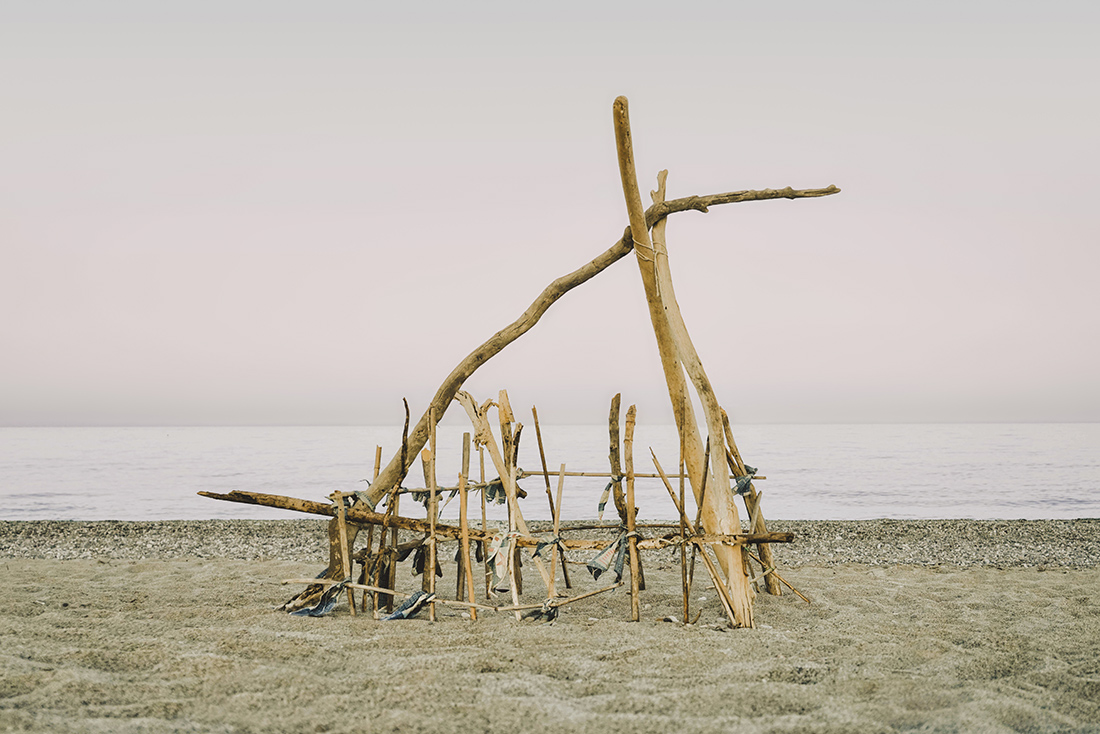 Temporary shelter
Refugees settle in public housing. Some of them live in migrant camps for years. Many are looking forward to the moment when they can return to their homeland and restore their destroyed homes. 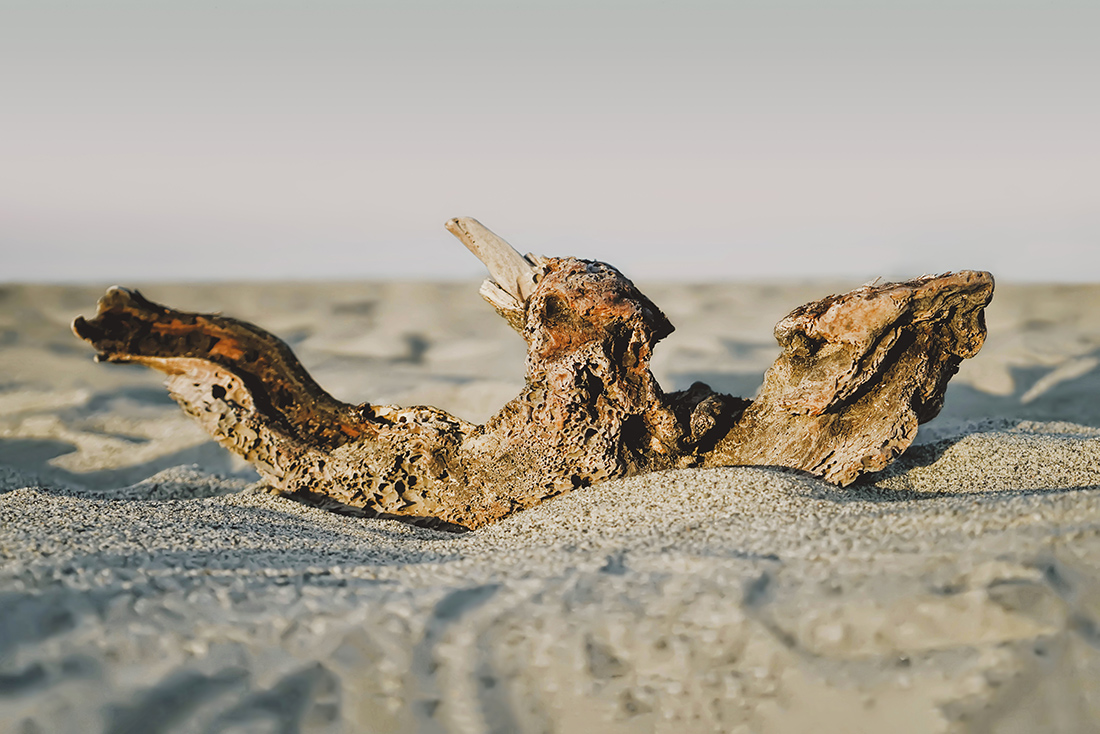 Bird
It takes a long time for migrants to start a full life: to gain freedom of movement, the right to work, to have children attend kindergarten or school, etc. Legalization requires a lot of time, but gives for refugee relative freedom. 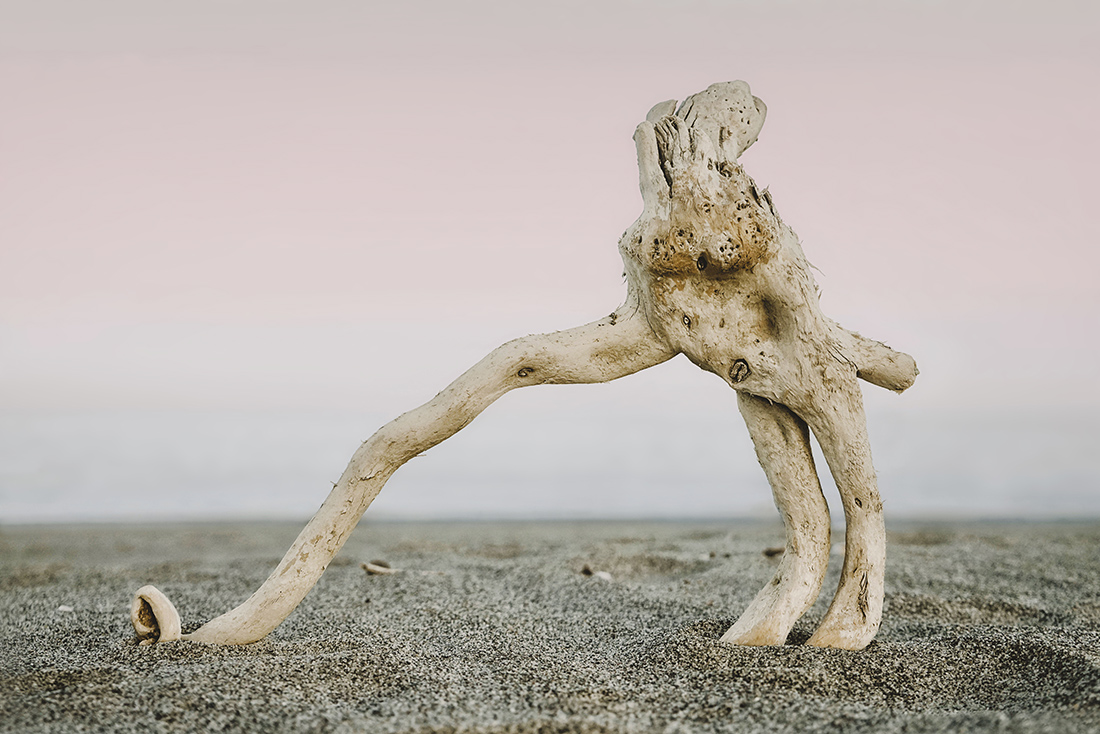 Other
Migrants experience hostility and signs of xenophobia from local population. Xenophobia is a fear of strangers, outsiders, who do not fit into a community, its norms and culture. 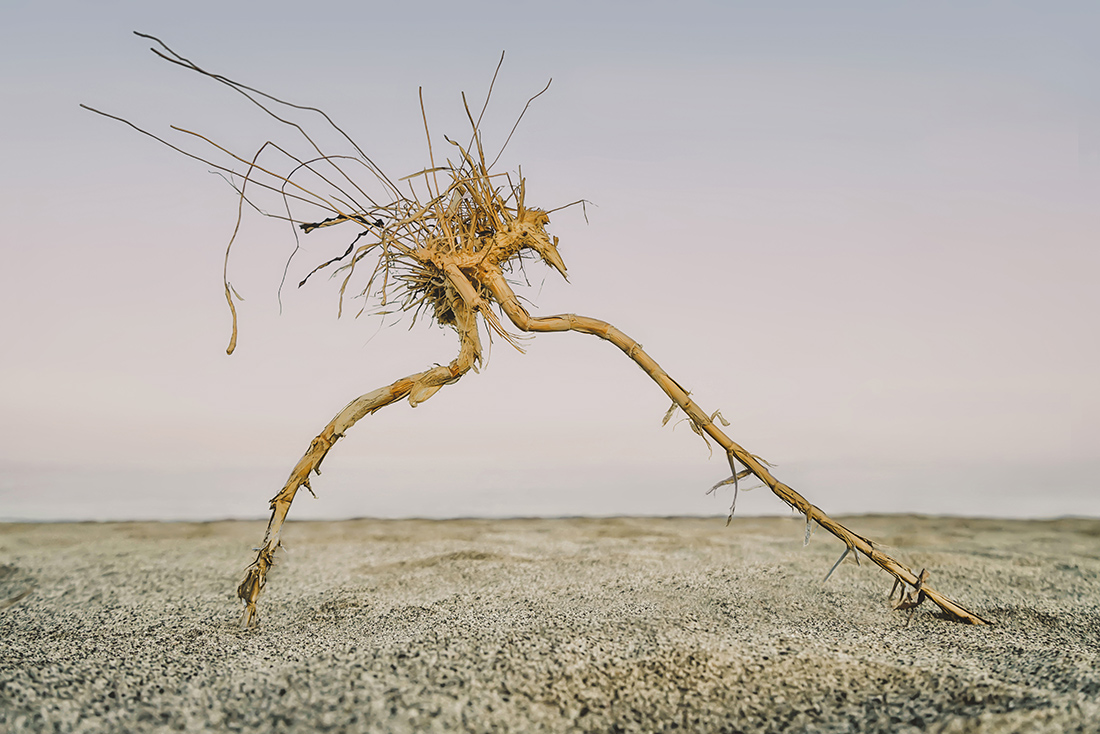 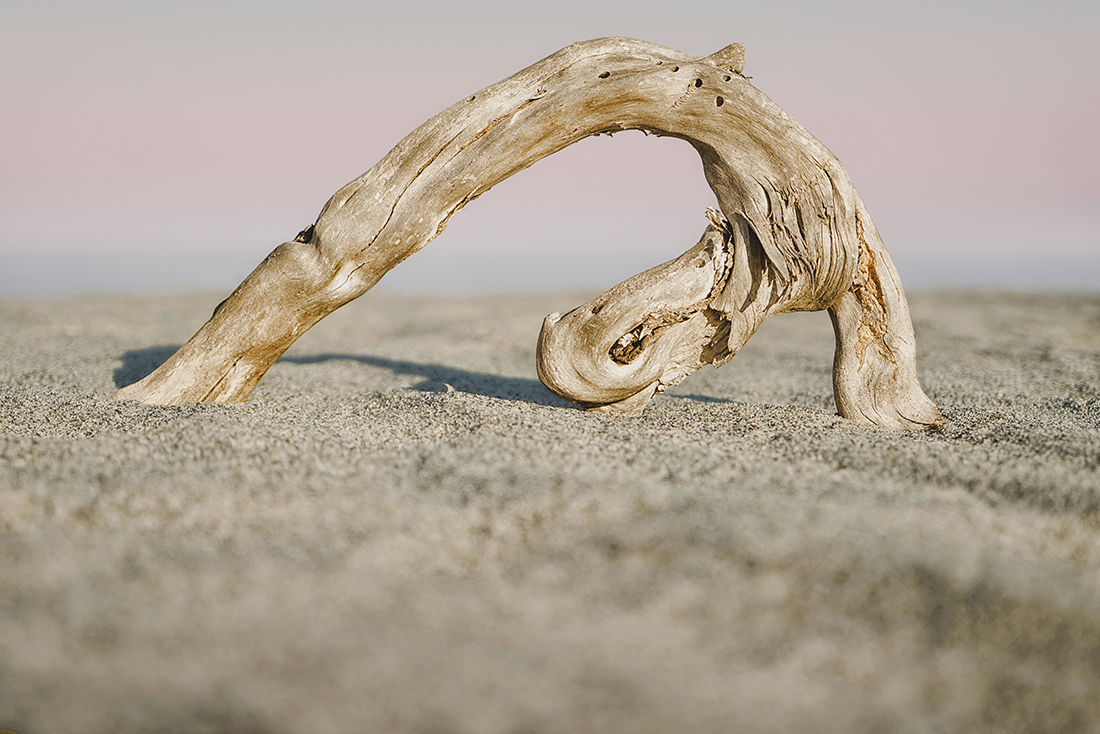 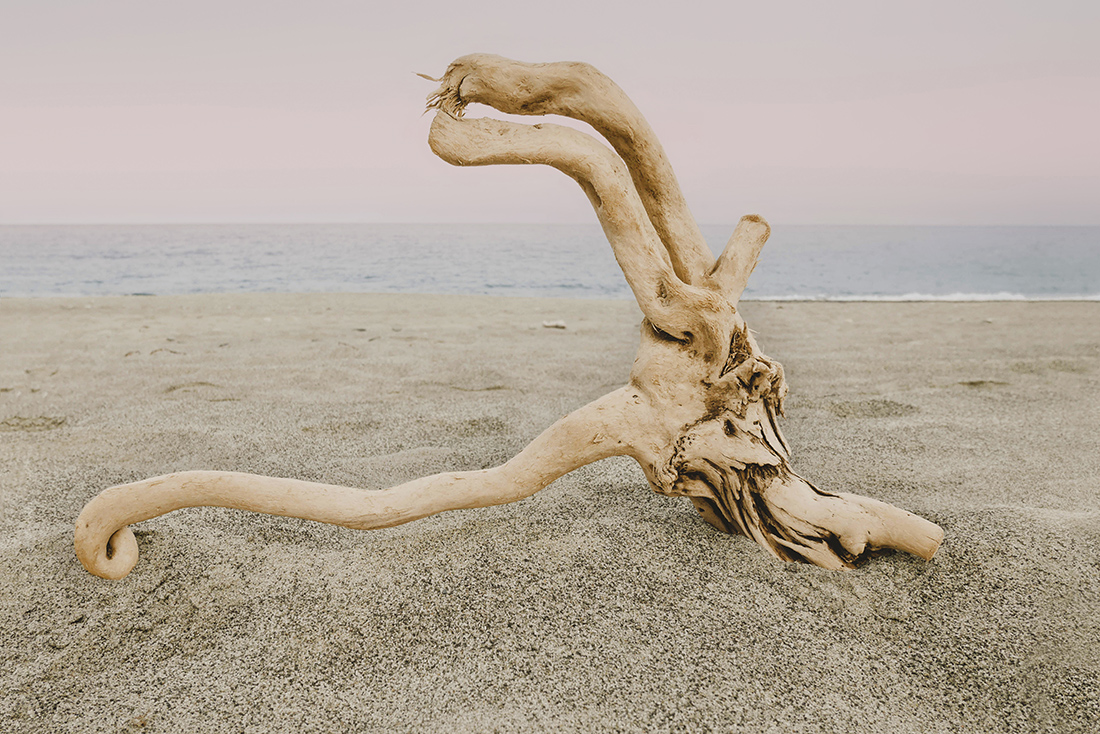 Stranger
More and more refugees are perceived as frightening figures of migration statistics, and not as people with their own often-tragic stories. 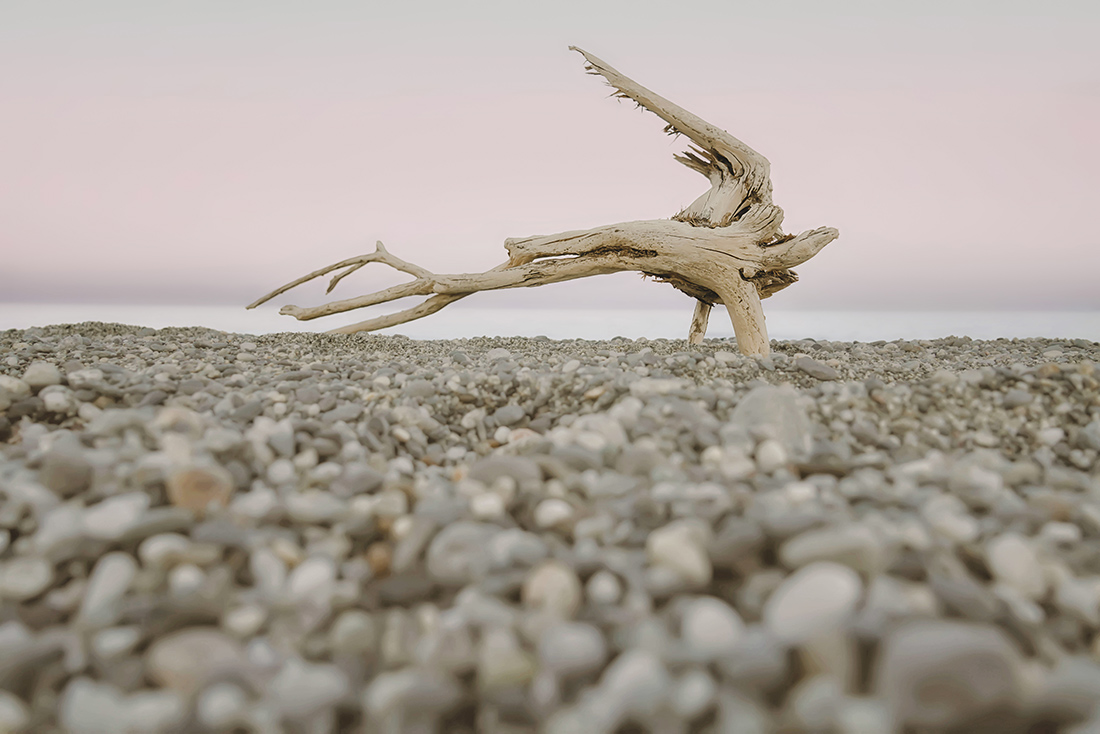 Unsub
Before being a refugee, one had an identity: a miner, a seller, a teacher, they had citizenship, social status. But in the blink of an eye they became nobody. People completely lose a sense of themselves, of who they are, of what they are capable of, and that is why it is difficult for them to adapt to a new situation. 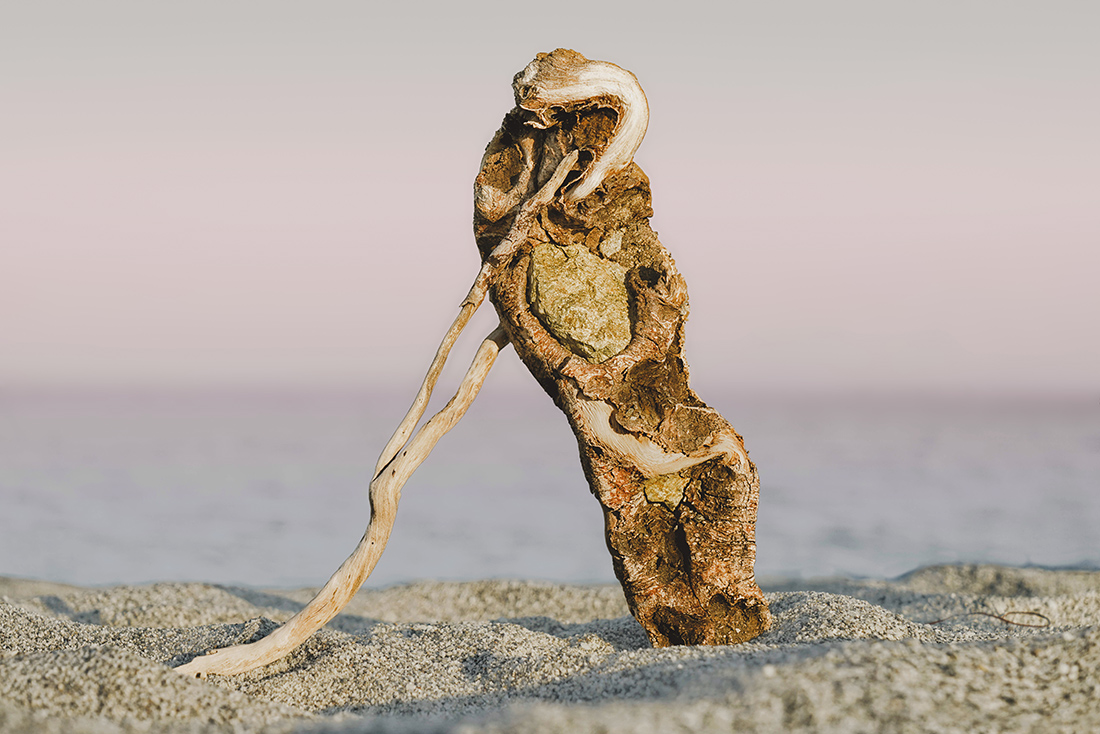 Support
They take one day at a time in a foreign country without knowing their future for sure. They leave their home to live without certainty, neither here nor there. Refugees need housing, employment, medical care, but first of all they need understanding. Fears, constant tension, self-doubt, attacks of aggressive behavior, obsessive thoughts, etc. Refugees need effective rehabilitation support. 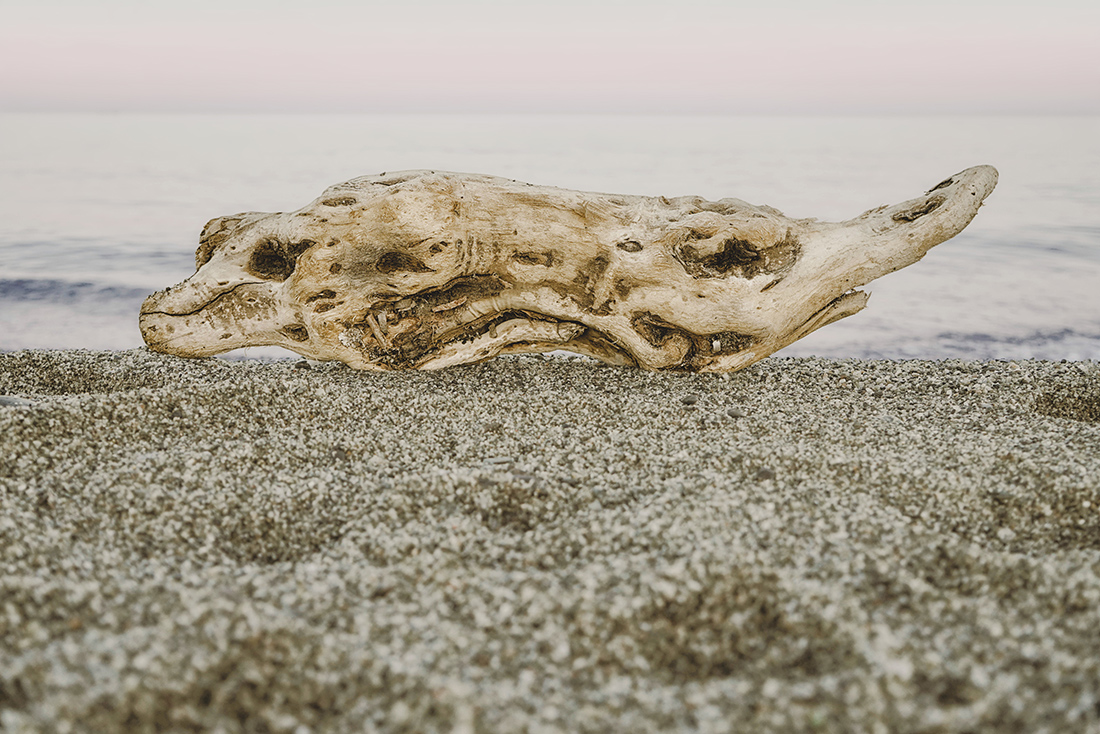 Live together but remain different
Refugees need social tolerance. Multicultural model creates favorable conditions for the integration of refugees. It helps migrants preserve themselves, above all, as individual carriers of different cultures and religions. 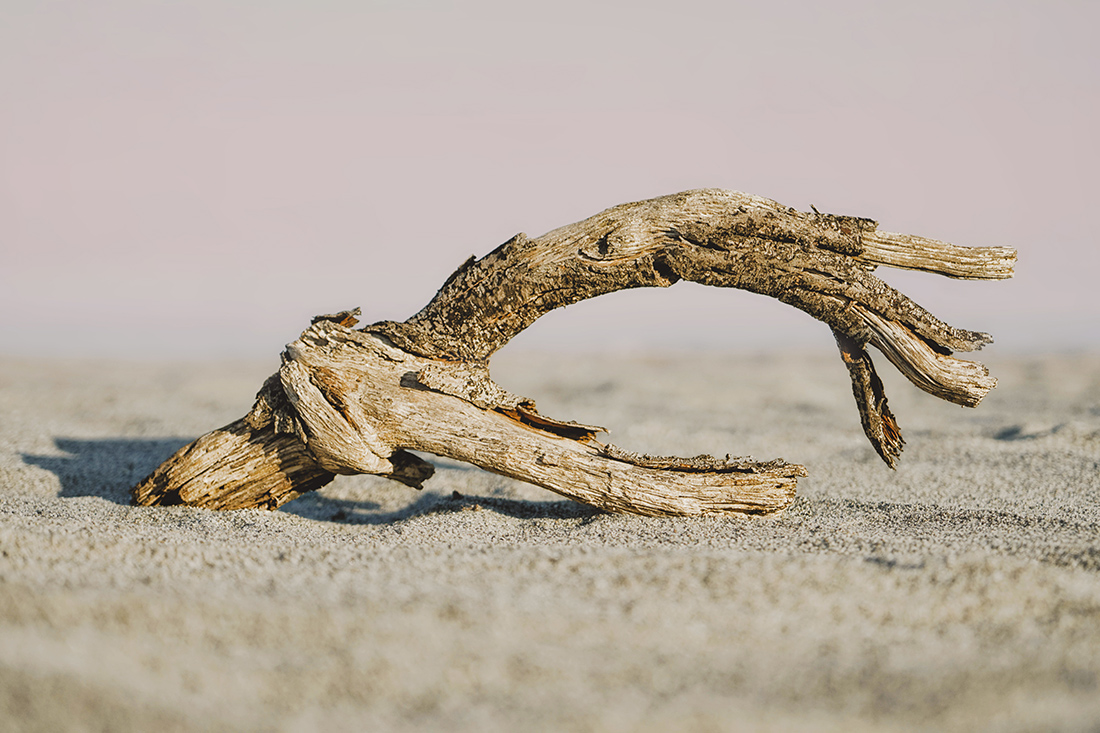 Refugees bearing the burden of their failed state are knocking on the doors of Western countries. No one wants or seeks to become a refugee. Being a refugee is not just being in a foreign country, it means living in exile and depending on circumstances and other people. Not letting migrants in is like condemning many of them to death.

A series of photographs named “Herbarium” by Alena Grom easily and metaphorically conveys the experiences of a person who is at the crossroads. In her project about refugees in Italy Ms. Grom talks about her experiences and analyzes a personal tragedy of an internal immigrant whose hometown turned out to be at the center of war.

A quote from an Italian director Paolo Sorrentino was chosen as an epigraph for this project. “Do you know why I only eat roots? Because roots are important.” Among the objects that Ms. Grom captures with her eyes are roots and branches of trees, dry grass, a sole – everything that happened to be thrown onto a deserted beach of Italian Calabria, the city to which migrants arrive. Using metaphorical language and imagery, Ms. Grom transmits a borderline state of a person, their experiences and emptiness. On the one hand, she shows people abandoning their “roots” – family, home, identity, their own past – and on the other, hope and search for a new place, desire to escape from old trouble and leave a mark on a new land. There is no dynamics in the photographs of the author, everything seems to stand still in anticipation of either an impending catastrophe or calm and serenity. At the same time, Ms. Grom’s frames smell of salty sea air, but they also contain a piercing wind, as well as life and death. A cold sea wave is responsible for life; cold sand and dry wind – for death. “Dryness” is conveyed by the name of the series – “Herbarium” – a collection of dried plants, prepared in accordance with certain rules. Migration is also a kind of a rule that comes from innumerable equations and solutions of a capitalist world; it is a consequence of years of politics and wars for resources and goods.

A person’s borderline state in Ms. Grom’s photographs is also emphasized by the choice of the type of shooting. They are made on an open diaphragm so that the object closest to a viewer is in focus while the background is blurred. This is a metaphor for the future and the past. For Ms. Grom this indefinite space is a true protagonist of this project. A coast is also a boundary separating land and sea. It is here that the choice is made: some migrants, who find themselves on land, manage to escape from the police, some are taken by special services and are deported back after a while, and some die.

Ms. Grom’s series of photographs is designed in a certain way, each photo reveals and complements the other. Some of the pictures are given names like Snake, Sea Monster, Tumbleweed, etc., and some are left without a name. An important work in the series is the work «Sole». Nothing tells about a person as well as their shoes: new patent leather shoes can be evidence of chic, a worn heel – of fatigue, poverty and shabbiness. However, a part of a shoe beached by a sea wave may indicate human tragedy and oblivion. Ms. Grom provides her audience with a free interpretation. Her simple but vivid images speak of the strongest drama of the XXI century, not deliberately, but easily and subtly, creating a whole range of feelings and interpretations.

Migration issues are often stereotyped by the stories of people from Africa and Asia. Nevertheless, the problem of war is also relevant to Europe. There is war in the very center of the continent that has lasted for five years now. For Alena Grom the decision to move from her native Donetsk was not easy either. She had to leave her desired home several months after the end of its construction. Now it is destroyed and looted.

With her “Herbarium” series of photographs Ms. Grom draws attention to refugees not as statistics, but as people who lost their most basic needs – shelter, food and security. “Before being a refugee one had an identity: a miner, a seller, a teacher, they had citizenship, social status. But in the blink of an eye he or she became nobody. People completely lose a sense of themselves, of who they are, of what they are capable of, and that is why it is difficult for them to adapt to a new situation,” the author comments.